In his last years, the legendary gourmet Kitaoji Rosanjin uttered the perhaps surprising words 'the best meal is the meal eaten at home.'

Rosanjin's gourmet aesthetic, 'not about eating tasty things, but eating with taste,' wasn't limited to the meal itself, but permeated all levels of life, down to the very roots of the ingredients in the soil, to the clay from which he created his own ceramic dishes.

Born in absolute poverty, passed from foster household to household, in an unstable childhood, Rosanjin developed a keen sense of the constantly changing situations and people around him. It was with this same sharp and discerning intuition that he strove ahead in his quest ultimately reaching the pinnacle of food, art, and lifestyle. 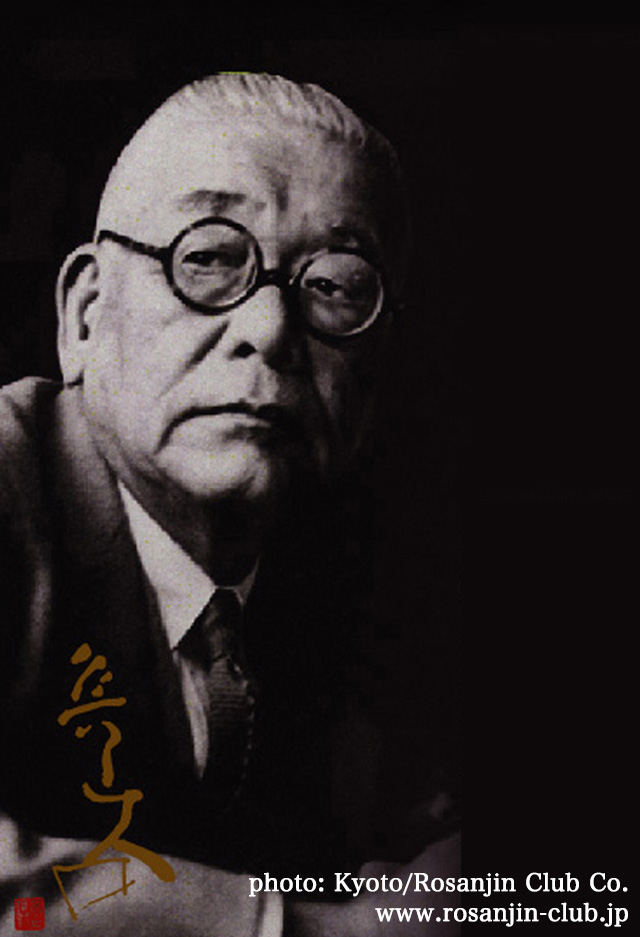 In 1883, Meiji era 16, in Kyoto city, Kitaoji neighborhood, Rosanjin Kitaoji was born as the second son to the hereditary line of Kamigamo Shrine priests.
A few months before Rosanjin was born, his father committed suicide, and a few months after his birth, he was abandoned by his mother. Born to such despair, Rosanjin was taken in by relatives, then passed from foster family to foster family, living a rough and unrooted childhood.

Adopted as a baby into a farming family, at age six Rosanjin was then adopted by and became apprentice to Kyoto woodblock engraver Fukuda Takezou. Graduating from elementary school at age 10, Rosanjin wished to study painting, however, because of his adoptive parents' insistence, he became an apprentice at a local herbal medicine pharmacy.

After finishing his apprenticeship in 1903, Meiji era 36, Rosanjin made his way to Tokyo, intent on becoming a calligrapher. The very next year he received first prize in a nationwide art contest held by the National Art Academy of Japan. With that, Rosanjin the calligrapher was on his way. Two years later in 1905, he became the private apprentice of renowned calligrapher Okamoto Ippei; in 1908, he travelled to north China to study calligraphy and seal engraving, also working for some time as general's secretary in Korea, at that time under Japanese rule.